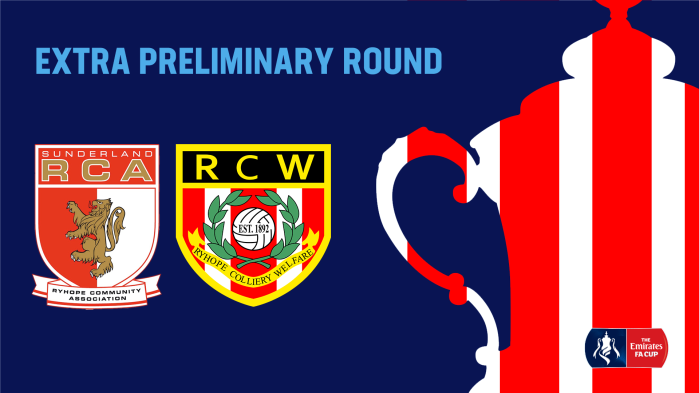 This Saturday sees Ryhope make a short trip to Northern League Division One rivals, Sunderland RCA in The Emirates FA Cup Extra Preliminary Round in a repeat from last years cup tie.

It will be a game of mixed emotions as both clubs will pay a mark of respect to former player Richie Jordan.

The last time both sides met in The Emirates FA Cup Extra Preliminary Round saw Sunderland RCA put Ryhope CW out of the cup in what was a typical derby style game, with scrappy moments, some aggression and moments of quality.

Ryhope found themselves behind within the first 20 minutes as RCA went two goals in front with strikes from Mark Davison and Michael Charlton before an own goal from a Nathaniel Skidmore free kick saw CW a goal behind at half time.

Davison and Larkin added another two goals for RCA before another own goal gave Ryhope a goal back but the game was done and dusted after a goal Larkin made it too difficult for Pearson’s side to come back.

Both teams found themselves down to 10 men in added time following a scuffle but with Swale’s side three goals ahead, Ryhope ended their FA Cup campaign.

Either Sunderland RCA or Ryhope CW are set to face either Kendal Town or Hemsworth on Saturday 24th August in the next round.

Pearson heads into the game with full squad selection at his disposal.

View all posts by ryhopecw